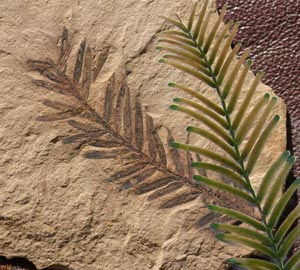 (A living fossil)
Until 1941 only fossil sequoias were known from the primeval sequoia. The coniferous genus was considered extinct. In 1941, however, living descendants were discovered in the inaccessible high forests of the Sichuan and Hubei regions in China. Since then, Metasequoia has been considered a living fossil. The recent species Metasequoia glyptostroboides is winter resistant and it has fast growth. Therefore is very popular in many gardens and parks around the World. with this archaic conifer. The fossil primeval sequoia finds mostly come from the Eocene and Oligocene of the American states of Montana, Oregon or Idaho. These regions were roughly 50 million years ago covered by dense Dawn Redwood /Metasequoia forests. In this category we offer a selection of fossil Metasequoia leafes for sale.
Show 1 to 4 (of in total 4 products)